Showing posts from September, 2013
Show all

By TucsonStage.com - September 20, 2013
Totalitarian Trauma  A dark drama at IT takes on sex, lies and government-speak by  M. Scot Skinner Anna, an editor at the Soviet-style Ministry of Information, is not one to complain and certainly not to the Director. But the man has summoned her and is now standing much too close. And if you must know, this new project might just be the death of her. Anna and her comrades, black markers in hand, are working like the devil cleaning up the personal letters of Russia's most famous composer. Seems the late composer was a boisterous homosexual who liked putting pen to paper. He documented his sexual adventures at length and with explicit glee. "It's pornography," Anna tells the Director, who clearly has a dirty mind of his own. The grim-faced worker, played by Lori Hunt, explains that the filth removal is proceeding as planned. But it's dawning on her that the Director (Roberto Guajardo) didn't call her to his office for a status report. Something else is going
Read more

Invisible Theatre’s 'The Letters' is a doubleplusgood drama 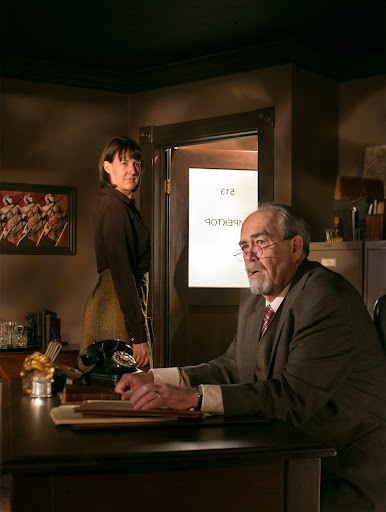 Power struggle play echoes Orwell's 1984 Dave Irwin TucsonSentinel.com Better known for light comedy, Invisible Theatre opened its 43rd season with a taut psychological drama that owes much to “1984,” George Orwell’s dystopian novel, as well as to the Soviet era that provides the play’s setting. The backdrop for “The Letters,” by John W. Lowell, is the Soviet Union of 1931, as Joseph Stalin was consolidating his dictatorship through fear and reprisals towards any and all opponents, actual or perceived. The play examines the issues of a culture built on fear and deception, through a two-person power struggle fraught with suspicion, manipulation and intrigue. The cat and mouse game begins Read the entire review here:  Invisible Theatre’s 'The Letters' is a doubleplusgood drama Lori Hunt and Roberto Guajardo in 'The Letters.' photo by Tim Fuller
Read more

Review: "The Letters" at Invisible Theatre

September 14, 2013 12:00 am   •   By Ann Brown Arizona Daily Star Surveillance, suspicion and misinformation evoked tension and paranoia during the Invisible Theatre’s opening Wednesday of its 43rd season with John W. Lowell’s 2009 “The Letters.” A departure from the theater’s often-sentimental fare, “The Letters” is a two-actor, 80-minute quiet thriller of intrigue set in a ministry director’s office in the 1931 Soviet Union. From the moment the lights go up on the monochromatic, sepia-toned office set — splashed with the bold red Soviet flag with its glinting gold hammer and sickle — a feeling of oppression percolates through the intimate theater. Portraits of Joseph Stalin and Vladimir Lenin ﻿ seem to be watching every move. Personal space reflects power and the shift of power in Invisible Theatre’s “The Letters,” with Lori Hunt and Roberto Guajardo. READ THE ENTIRE REVIEW HERE:   Review: "The Letters" at Invisible Theatre .
Read more

Theatre - Let the Show Begin Anna (Lori Hunt) keeps up her guard talking to The Director   (Roberto Guajardo)   in "The Letters" The most fascinating aspect of Invisible Theatre’s production of “The Letters,” directed by Susan Claassen, is how two actors – Roberto Guajardo and Lori Hunt – can create such electrical tension on stage using only their words and their body language. Without question, “The Letters” is the first must-see event of the new season. It is powerful the way sheer drama is powerful, drawing truth from taut conflicts between willful personalities. Instead of threatening weaponry, massive explosives hooked up to a ticking timer, agitated suicide bombers or other such special effects, there is a desk and two chairs. And talent…there is a lot of talent. Guajardo is The Director and we are in his office, with his title painted on the door. Hunt is simply called Anna, a subordinate. She seems to be a featureless cog in the bureaucratic Soviet mach
Read more

By TucsonStage.com - September 06, 2013
September 05, 2013 12:00 am  •  By Chuck Graham Special To The Arizona Daily Star “The Letters” lit up regional theaters across the nation, reminding audiences of uneasy reports about U.S. government programs to spy on its citizens. Tucson’s Invisible Theatre has scheduled its production of Lowell’s “The Letters” opening next week. Read the entire preview here: Invisible Theatre stages "The Letters"
Read more
More posts