By TucsonStage.com - October 26, 2016
By Chastity Eva Laskey Special to the Arizona Daily Star Invisible Theatre has some old-fashioned romance sprinkled with humor in mind. The company opens Kenny Finkle’s “Alive and Well” next week. It tells the story of a couple searching for the oldest living Civil War veteran and finding much more than that. Susan Claassen, director and IT’s managing artistic director, says the play is in the spirit of the golden age of Hollywood’s great romantic comedies, such as “Romancing the Stone” and “African Queen.” Read the entire review [ click here ].
Read more

Link to AZ Star   Tucson's Invisible Theatre starts its season with laughs By Kathleen Allen Arizona Daily Star       Tim Fuller "Love and Marriage Go Together Like" …  unless you are romance author Frances Kittridge (Susan Kovitz) and her husband comedy columnist Colin (David Johnston) who are going through a trial separation and division of worldly goods while living in the same NYC apartment! So she has planned Invisible Theatre’s season accordingly. “The first couple of shows are lighthearted in what appears to be a challenging fall for the world,” says Claassen, the company’s managing artistic director. Next week, IT opens its 2016-17 season with Fred Carmichael’s comedy, “Coming Apart.” At its heart:  “Coming Apart is “a romantic comedy of love and marriage, but it also touches on what happens when pride enters a relationship,” says Claassen, who is a member of the cast. The couple coming apart are both writers who have been marrie
Read more

SNAPPY "PICTURES" HAS NEIL SIMON'S HUMOR AND HEART Top of the cream actors (from L) Susan Kovitz, David Alexander Johnston and Lucille Petty stir up Invisible Theatre's "I Ought To Be in Pictures." There was life before cell phones and laptops. We know this because Invisible Theater is playing Neil Simon's “I Ought To Be in Pictures,” with actors using an actual typewriter and a telephone. Kind of a shock to see, especially that typewriter. So noisy. How can a writer think with all that clatter going on? No matter. From out of all this low tech chaos, director Susan Claassen and associate director Fred Rodriguez have created a lighter-than-air comedy laced with loving sentiment in a top cream cast of Lucille Petty, David Alexander Johnston and Susan Kovitz. Simon's play debuted in 1980, telling the story of Herb (Alexander) who ran away from his New York wife and family in the early Sixties, beating the hippies to California and
Read more 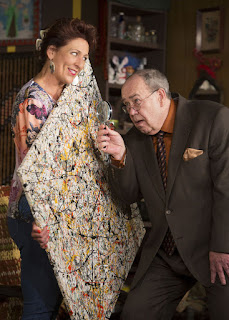 Review: 'Bakersfield Mist' at Invisible Theatre by Ann Brown Class attitudes and cultural differences collide like the paint and colors of a Jackson Pollock painting in Stephen Sachs’ comedy “Bakersfield Mist,” which Invisible Theatre opened Wednesday night. Sachs, inspired by news accounts of a woman who purchased what she hoped was a Pollock painting in a thrift store, puts Maude Gutman ( Susan Kovitz ) in The Sage Brush Trailer Park in rural California with a painting that might — or might not — be a pricy Jackson Pollock, which she picked up for $3 as a joke gift for a friend. Maude is a rough-hewn, profanity-spewing unemployed bartender who is anxious to prove the authenticity of the supposed Pollock. She wants it to be real, and not just for the money. A former director of the Metropolitan Museum of Art, dubbed the “Vatican of art” in the play, and expert from the hoity-toity International Foundation for Art Research in New York, Lionel Percy ( Roberto
Read more