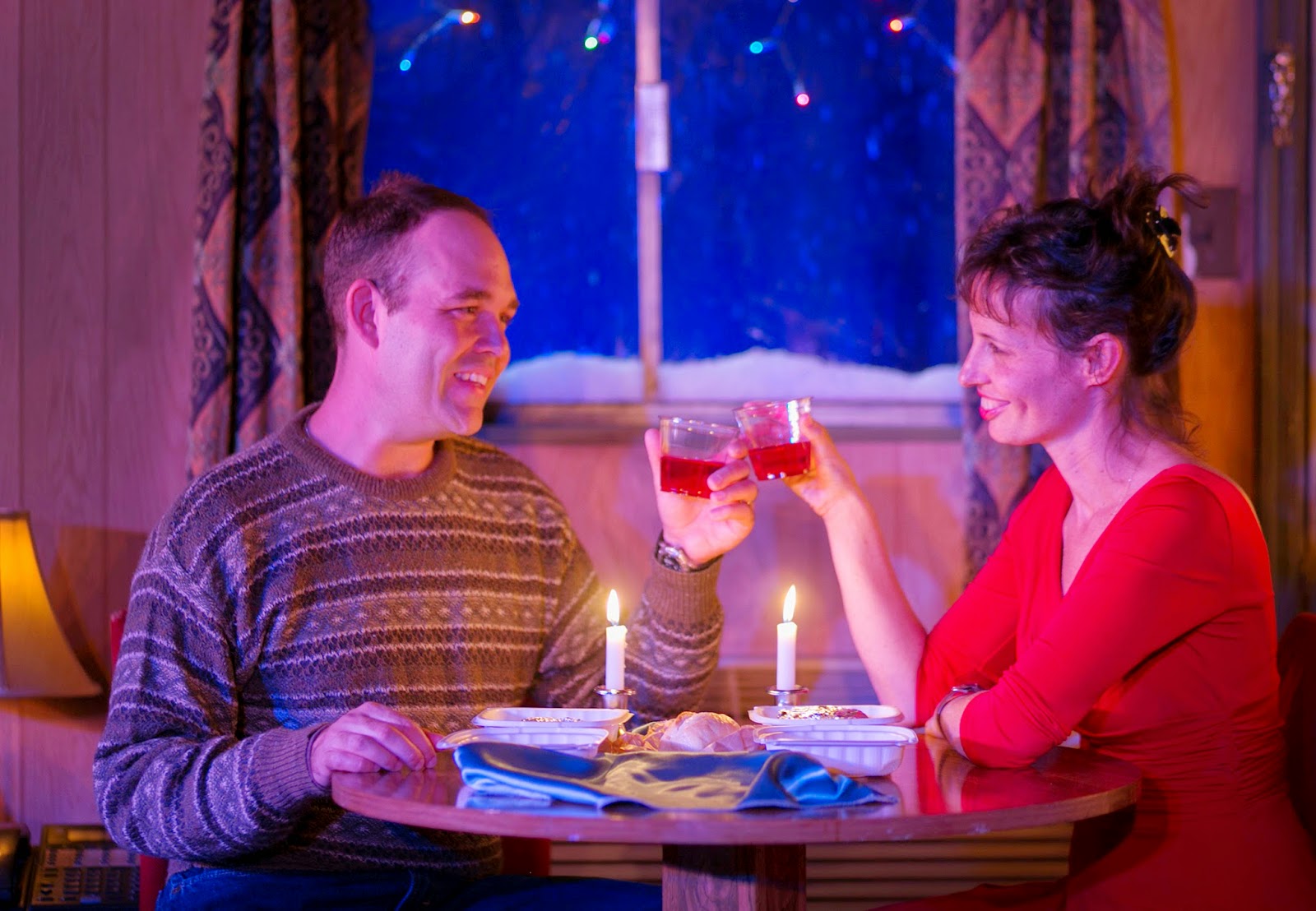 Thank you Chuck Graham for this rave review!!!


This year give the holidays an ecumenical lift by taking in an Invisible Theater performance of “Handle With Care,” a sweetly charming Jewish Christmas story about finding love in a provincial Virginia motel the night of Dec. 24, as a gentle snow falls outside on the window sill.
All the magic of the seasons – both Christian and Jewish – are sprinkled throughout the play by Jason Odell Williams. Lots of good humor and some tips on Jewish religious traditions fill the animated dialogue being tossed about by Ayelet (Israeli actress Noga Panai), Josh and Edna, played by local talents Luke S. Howell and Lois Lederman.
On hand to be the Southern boy who only knows what he's learned in Sunday School is Terrence (Jesse Boone), the hapless DHL driver who had his delivery truck stolen with the body of Ayelet's grandmother inside. Terrence is also best buddies with Josh, whose mother is Jewish and father is Catholic.
In flashbacks two days before, we learn Ayelet's grandmother Edna has brought Ayelet from Israel for a visit to Virginia. So the scenes bounce back back and forth, bringing the two stories together as, toward the end, Josh and Aylet make some discoveries about each other that could only happen in the spirit of Christmas.
Panai is the sparkle at the center of this IT production directed by Susan Claassen. With tightly focused energy and a natural command of Hebrew, Panai has her own magic to make anything seem possible.
Josh is the nice Jewish boy who doesn't even know he is one as the play begins. He only knows a few words of Hebrew that have any use in polite company. And has just a passing familiarity with Jewish religious traditions. But Josh becomes an eager learner as he begins to realize the importance of these traditions to Ayelet, who speaks very little English.
As for the humor, much of that comes from Terrence trying to explain how the grandmother's body disappeared when someone stole the delivery truck without looking inside first – just figuring that on Christmas Eve the truck would be full of Christmas presents.
All this gets worked out over several scenes in both acts, fumbling, with the language, learning Ayelet's boyfriend in Israel was a jerk who dumped her and Josh's wife was killed in an auto accident two years earlier.
The mysterious figure is Edna, the grandmother, whose own love story from her youth got tangled up back in times more rigidly controlled by those same Jewish traditions.
"Handle With Care” lives up to its title, proving once again that romance at any age can become a powerful healing force. Claassen nurtures these feelings, as well as our willingness to believe such a sentimental story could happen during this highest of holidays for both Christians and Jews.
Sometimes it can feel really good to just believe in the importance of believing a little harder.
Performances continue through Nov. 23 at 7:30 p.m. Wednesdays-Saturdays, 3 p.m. matinees Sundays and also Saturday, Nov. 22, at Invisible Theatre, 1400 N. First Ave. All tickets are $30, with discounts available. For details and reservations, 520-882-9721, or visit www.invisibletheatre.com