'In the Mood' romance, laughter and fun

Nothing lifts the spirit more (and doesn’t induce a hangover) than escaping with a bit of comic relief. That’s exactly what Invisible Theatre offers with its current stage production of “In the Mood.”
This light romantic comedy by Kathleen Clark is staged in a posh, high-rise Manhattan apartment. For anyone who has ever had the pleasure of meeting IT’s founder, you won’t at all be surprised at how bold the set for “In the Mood” is and really comes to life. Claassen, herself, is larger than life in her attire and her stage is just a vibrant. The woman knows color. Claassen forever turns heads. She and James Blair designed the set and transformed her intimate theatre into an incredible luxury NYC apartment — heavy on the black, white and red . It’s simply striking. The apartment even has a (sometimes) working elevator upstage center, which is intentional and part of the script. This is all good, but then again, so is the cast. 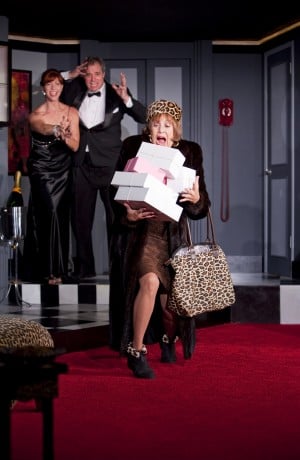 Sally (Polly Schiltz) foreground, attempts to help her friend Perri (Betsy Kruse Craig) and brother Nick (Bruce Morganti) with a surprise party but ends up adding to chaos in this romantic comedy by Kathleen Clark.

Posted by TucsonStage.com at 7:32 AM