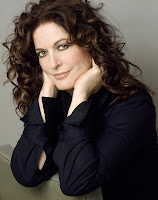 Presented by the Invisible Theatre
8 p.m., Tuesday through Saturday, Tuesday, June 21, through Saturday, July 16
Arizona Inn, 2200 E. Elm St.
$35; discounts and packages available
882-9721
Ann Hampton Callaway will bring her mastery of multiple musical styles in for three performances, June 23-25. The award-winning composer/lyricist/singer/pianist/actress will not only sizzle, but with her full-hearted approach to making music, she is sure to smolder as well.

Although she now calls New York home, Callaway grew up in the Chicago area and says music was ever-present, so much so that it was "like breathing. I'm really grateful that I experimented with many different art forms, but I felt music was the most beautiful way to draw all the things I love and do into one field of endeavor."

Callaway says that she was particularly inspired by Carole King. "Whatever year Tapestry came out, I was walking around with my allowance and walked by the record store and saw the album. I had never heard of Carole King, but I was so intrigued by the album cover, I immediately bought it on a leap of faith. When I played it, it was an epiphany: 'This is what I want to do with the rest of my life. I want to write songs and sing songs from the heart like this incredible woman.'"
Years later, Callaway and King wrote a song together for Callaway's Slow album. "She didn't want to write the song until the day of the recording, and we worked from 11 a.m. to 2 p.m. to finish it. Then she stayed to hear me record her song 'Will You Still Love Me Tomorrow?' It was one of the greatest days of my life."
Callaway has also collaborated with Barbra Streisand. "I had written a peace anthem, and when I finished it, I just thought, 'This song belongs to Barbra Streisand.' It took seven years to get this song to her, and about 150 rewrites later, she recorded the song—10 years to the day that I wrote it." Streisand also sang Callaway's "At the Same Time" for Streisand's "millennium" concert. "So thanks to Barbra, I have two platinum records and one gold record and a lot of great memories. She was always honest, direct and sweet to me."

Having played several concerts in Tucson before—one with the Tucson Symphony Orchestra—Callaway says she's looking forward to the intimate setting at the Arizona Inn, where she and the audience "can really experience each other. The songs I choose to sing in my shows are so powerful, and I am willing to share who I am and put in all the heart and soul and imagination I can. A night with just me and an audience is a recipe for a lot of magic."
ann hampton callaway arizona inn invisible theatre jack neubeck music susan claassen tucson

Popular posts from this blog

Tim Fuller"Love and Marriage Go Together Like" …  unless you are romance author Frances Kittridge (Susan Kovitz) and her husband comedy columnist Colin (David Johnston) who are going through a trial separation and division of worldly goods while living in the same NYC apartment!

So she has planned Invisible Theatre’s season accordingly. “The first couple of shows are lighthearted in what appears to be a challenging fall for the world,” says Claassen, the company’s managing artistic director. Next week, IT opens its 2016-17 season with Fred Carmichael’s comedy, “Coming Apart.”
At its heart: “Coming Apart is “a romantic comedy of love and marriage, but it also touches on what happens when pride enters a relationship,” says Claassen, who is a member of the cast.
The couple coming apart are both writers who have been married for 21 years. “How do they celebrate each othe…
Read more

Invisible Theatre to open "Bakersfield Mist"By Kathleen Allen
Jackson Pollock’s work has inspired many. And stories surrounding the artist's works have been inspired, as well. One of those stories drove playwright Stephen Sachs to write “Bakersfield Mist,” which Invisible Theatre opens Wednesday, Oct. 14. Pollock’s work is at the center of the comedy, which is a roller coaster ride with it's smart, biting dialogue to the vast differences between the two characters in the play. Susan Kovitz as Maude and Roberto Guajardo as Lionel in Invisible Theatre's production of "Bakersfield Mist." -- Credit: Tim Fuller Read the entire preview here: http://goo.gl/P1WPeh