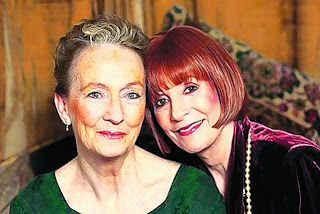 
Published: 01.11.2008
Veterans star in 'tribute to friendship'
By Sherilyn Forrester

SPECIAL TO THE ARIZONA DAILY STAR

Award-winning New York actress Kathleen Chalfant never really wanted to do anything but perform.
But the respected actress, who won the Obie, Drama Desk, Lucille Lortel and Outer Critics awards for "Wit," took a while to acknowledge her desire.

"I had a brother 14 years older than I — he was the glamorous gay older brother — who gave me the original cast album of 'My Fair Lady.' Of course, we would act out all the parts. And my grandmother took me to see wonderful movies — and not just those for children, although I think that's what my parents thought. I was in school plays. I played Hedda Gabbler when I was 17," she says, laughing.
"But when I went to Stanford I studied classical Greek. I was getting ready to go to graduate school and my husband asked me if that's what I really wanted to do. I thought, no, I don't. I want to act. So I found an acting teacher — several actually — and that's what I've been doing ever since."

Chalfant and Patricia Elliott will appear in "Vita and Virginia" for two performances this weekend at the Berger Performing Arts Center. The Invisible Theatre is sponsoring their visit. Elliott won the Tony, Drama Desk and Theatre World awards for her Broadway debut in 1973 as Countess Charlotte in Stephen Sondheim's "A Little Night Music" and received a second Tony nomination in 1977 for Michael Cristofer's "The Shadow Box."

"Vita and Virginia" by Dame Eileen Atkins is actually a dramatic rendering of letters between writers Virginia Woolf and her longtime friend and lover, Vita Sackville-West. Atkins and Vanessa Redgrave performed the play off-Broadway in 1994.

Pamela Berlin has directed this staging.
"It's really a great tribute to friendship," says Chalfant. "The love affair is actually secondary. The shape of friendship over time provides the shape of a life, and that makes it a fulfilling piece.

"Theirs was a very complicated relationship. They were both married to loving husbands. They were both writers — and very witty, so that adds a great dimension of fun to the piece.

"But it's really the story of two lives which can't be pigeonholed."
Although the words of the play are actually their letters, there is enough drama and conflict to make for good theater, she said.

"The drama arises from the conflicts within their relationship. It is a love story, after all. There are always conflicts."
Chalfant notes that Woolf and Sackville-West were two very gifted women but very different in the degree of their gifts, particularly as writers.

"Vita Sackville-West wanted to be a great writer. She was completely in awe of Virginia Woolf, and she was desperate to have Woolf's approval of her talent. It can be very painful when the thing you're loved for is not particularly what you want to be loved for."

The play reveals their struggles while celebrating their eloquence.
Chalfant is quite eloquent herself as she speaks of her passion for theater and her commitment to the arts, which she believes "are by their very nature political."

"Artistic efforts are also inherently hopeful. Art is transformative. The very act of artistic expression says change is possible. We can learn. We can open ourselves to differences. Our fears can be transformed.

"I think of Tony Kushner's 'Angels in America.' It's just so beautiful. People who might be antagonistic to the subject matter can't help but respond to the beauty of that piece and somehow be changed."
Chalfant received Tony- and Drama Desk-award nominations for her role in the original production of "Angels in America."

The No Frills Theatre Company, which is dedicated to producing plays with roles for women over 40, will produce "Vita and Virginia" on Monday nights at the Zipper Factory Theatre in New York beginning Feb. 11 and continuing through April 28.

"As long as anyone comes," quips Chalfant.
"Yes, our performances in Tucson will be our out-of-town tryout," she laughs. "Tucson is our New Haven."

In addition to "Vita and Virginia," the Invisible Theatre is also sponsoring a performance of "The Baghdad Burning Suite," with Kathleen Chalfant and jazz musician and composer Liz Magnes.
The public performance is Monday.

The piece is based on a blog by a young Iraqi woman known only as Riverbend, who began her comments after the fall of Saddam Hussein in 2003.
"We have put together excerpts from primarily the first year of her writing. It really sets the stage for all that has happened after," said Chalfant.

"Liz's music is a response to this remarkable young woman's words, and it is amazing. She has lived most of her adult life in Israel, and her music really evokes the Middle East. Peace and reconciliation are also her great passions."

Chalfant says the piece has been presented at various benefit events, using different actresses. In Los Angeles, Amy Brenneman and Tyne Daly were featured.
"We probably won't be able to present this much longer, because of copyright matters. There are a couple of plays and movies in the works that feature Riverbend and her story."
– Sherilyn Forrester


● Sherilyn Forrester is a Tucson-based freelance writer.
● Check out the Riverbend blog at riverbendblog.blogspot.com.
Posted by TucsonStage.com at 12:25 PM